“A public service announcement for anyone who has only known Rob for two minutes or so: Rob is made of contrary atoms. Whatever makes perfect sense to you, he will immediately (and with surprisingly little indication of artifice or irony) assert the opposite. Does he really believe what he says? Probably, because he’s made of contrary atoms. Will it do any good to argue? Probably not, but sometimes you are compelled to do so, because his assertions seem so patently unfounded and indefensible. Has he really thought it through? Hard to say, because he will defend it to the death no matter what. I for one celebrate the contrary atoms of Rob. Who’s with me?”

Robert Peate has always loved to write. He wrote his first poem at age eight, for a school literary magazine, and his first story at age eleven for an English class. He wrote primarily for his own amusement for many years, then joined the self-publishing revolution in 2010 with Cagey and 2 Others, a collection of three short stories.

In 2005 Robert completed his first major work, The Recovery, a play depicting the life of Yeshua of Jerusalem. In 2013 he completed his second major work, Sisyphus Shrugged, a sequel/rebuttal to Ayn Rand’s Atlas Shrugged.  On GoodReads’ list of fiction exploring American political thought, Sisyphus Shrugged has ranked higher than such classics as Brave New World, 1984, All the King’s Men, The Manchurian Candidate, and Primary Colors.  This work earned him an interview on Portland’s KBOO-FM, which you may hear on this website, and a letter from Nancy Pelosi.

Robert and Lisa Loving in the KBOO studio, July 3, 2013, photo by Steven Nassar.

In 2016 Robert finished his third major work, Money’s Men, his continuation of Sisyphus Shrugged.  In 2017 he released his second and third collections of short stories.  In 2018 he released his fourth major work (his fourth collection of short fiction), entitled The Time Before, which is double the size of his previous collections and earned him the praise of Nkechi Diallo (the former Rachel Doležal), on whose life one of the stories in the collection is based.  Despite his pride in his previous literary accomplishments, Robert considers The Time Before his most satisfying book, due to the quality of the writing and the variety of the subject matter.  He continues to write and release.

Now having written fiction, nonfiction, and poetry for over thirty years, Robert lives and writes in West Linn, Oregon, with his wife and their two children.  Robert says of his work:

George Orwell said, ‘Every line of serious work that I have written since 1936 has been written, directly or indirectly, against totalitarianism and for democratic socialism, as I understand it. It seems to me nonsense, in a period like our own, to think that one can avoid writing of such subjects. It is simply a question of which side one takes and what approach one follows.’  I see myself as following in his tradition of using literature as social commentary on the issues of the day.  I have carefully targeted my recent work on problems that I wish to lance like boils, such as Christianity and capitalism.

I provoke thought, because that is what needs provoking. Humanity seems to hate thinking more than any other activity, and yet that is the activity most needed. I do what I can to force thought along, and I am hated and shunned for it. That’s ultimately acceptable to me, because the work needs to be performed; I can perform it; and I wish to perform it. Let others appreciate it or not as they may; it pleases me to do what I do, so I do it.

My philosophy of art used to be, ‘Art should be as beautiful as possible–the World is ugly enough.’ I felt the goal should be to uplift and inspire to make the World a better place. I still feel that goal, but now I think the method can include some of the World’s ugliness, carefully managed, to aid in the inspiration.  The artist’s palette includes a range of good and evil, as the World does.  Knowledge of the World requires that we study wrong as well as right.  Presentation is key.

I love writing, but I don’t have a choice about it.  I can’t stop it from happening.  I’m told some writers need to eliminate distractions to write, but when my inspiration comes, it distracts me from everything else no matter where I am or what I am doing!  This can be quite inconvenient, even dangerous.  It’s like a dream that takes over. Sometimes I feel I don’t live in the real world, and those who know me might agree.  Of course, we all know what the song says: ‘Life is but a dream.’

I live for stories: reading them, watching them, writing them, and discussing them.

I see more and more of you urging writers and artists to challenge evil. Let me add my voice: use your muse to fight injustice, to provoke and challenge, to motivate your audience to work for better, or at least to bring succor to those who have worked and will work again tomorrow. Make your work important. If you write romance or paint abstract, add some politics. Now is the time to save the World again.

Whether fiction or nonfiction, I write what I feel needs writing. I used to want to be the next Jane Austen, writing charming and subtle social critiques. They are not what needed writing. What I did write is what I felt was needed: direct challenge. The problems are too great to beat around the bush, or perhaps I merely lacked the patience. It is also possible that, to an extent, Jane played it safe. She was certainly capable of understanding, and most certainly did understand, global and national politics. Perhaps it is that she lacked the freedom I enjoyed. Regardless, I have chosen the direct attack, the only succinct method for attacking the biggest problems: clear, direct, concise. Take it or leave it, but I don’t write to read myself write. I write for you. Your reaction determines my success, so for me the process is only half complete until I know whether or not what I did was successful with the reader, the audience.

A Word on Style

I see my writing as crisp, clean, and streamlined. Only the essential is written; the nonessential is not. I provide enough to let the reader use imagination. But in addition to that, I think there is beauty in simple clarity. I use few words but words that mean things, exactly what I wish them to mean. I do not need twenty words when one will do. I say much with few words. 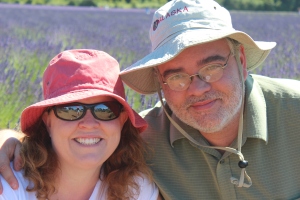 Far left: my wife, Robin; our children, Claire and Lucas; me; and our dog, Flower, on the Oregon coast.

Near left: Robin and me at a lavender festival.

Bottom: in the forest at Proxy Falls.

“Robert’s work is so fundamentally profound that it elicits
a deep re-evaluation of one’s beliefs,
questions that demand responses from one’s inner being.
. . . His work is a deeper study of human nature and capitalism than I have ever read.”

“Your words are needed.”

“Robert Peate is known to employ sarcasm, misdirection, and hyperbole in his writings. It leaves the reader not always knowing his true intentions and then having to consider multiple facets of the sentiment he’s transmitted. It sometimes comes off as brilliant. Certainly not boring. It’s possibly why I avidly read his stuff even when it occasionally pisses me off.”

“Robert’s words have touched my soul.”

“You cause my brain to overheat.  And that’s a good thing.”

“Books are part of the Great Conversation.”–David Kirby,
poet and Distinguished Professor of English at Florida State University

For me it’s about the exchange of ideas in this large conversation we’re all having.
Say something!

Just for fun, here is a picture of my children at Cars Land.

“To make the individual uncomfortable, that is my task.”