I have written on various topics for school, work, and pleasure my entire life.  In 2008 I took an essay-writing class under Susan Reese at Portland State University, and she taught me that essays can be as creative as fictive works.  In 2017 I started writing essays that I considered worth sharing on a more regular basis than before, and in November of 2018 I decided to collect my recent essays into one volume, titled Too Serious: Essays.  Subsequent volumes are below. 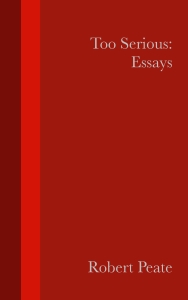 Why I Almost Cut My Penis Off
Binary Morality by Beverly Garside
Homework
Punishment
CENSORED: a Review
Responsibility in Communication
Life is Cheap
Little Boy, Mon Amour
The Fear of Self
“Literally” Explained
Oppressing the Privileged
Race and Rachel Doležal
Confessions of a Patriarch
Laziness

In 2019 I released my second collection, Too Serious Too: More Essays.

In 2020, I began writing what would become my third collection of essays, Thrice Serious: Essays III.  The pieces in it continue into 2021.